I got Persona 4 Golden together with my Playstation Vita several years ago. I played it for a little bit, but I was very busy at the time and didn’t feel like I had the time for a game that actually demands that you pay some attention, so I put it down. Big mistake – Persona 4 Golden is without a doubt the best game on the console, and perhaps one of the best of its generation.

A few months ago, I read a discussion online about the Persona games, and I remembered that I was still to finish Persona 4. It wouldn’t be the first time I’d pick it back up, either. When the game first came out on the Playstation 2 in 2008 (I ordered it from Videogamesplus.ca, since I wasn’t aware that it would even get a European release – it did, courtesy of Square Enix, the next year). I honestly don’t remember playing it much at that time, although I really liked the artbook that came with it.

As noted above, I picked it up again for the Vita, and again I put it down. I apparently have a bit of a tendency to do that – I did the same thing with Persona 3, where I got the PS2 version, never finished it, and then played through the improved PSP version instead. 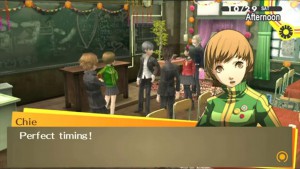 There really are no excuses not to play Persona 4 Golden. If you just want to experience the story, put the difficulty on casual, and you literally can’t lose (if you die, which is incredibly hard on that level, you’re just instantly revived). And you should, because the story and characters are both excellent. When I think of japanese roleplaying games, I generally don’t think “great writing”, but Persona 4 has just that. You’ll really find yourself connecting with the characters, identifying with them on an intimate level. To be expected of a game that focuses on how important bonds between people are, but just wanting to focus on characters doesn’t make it any easier writing great ones.

I found myself spending more time leveling up Social Links and doing side quests than I did going through dungeons – which isn’t me being critical of the game, to me it just shows how wonderful the story and characters parts really are. 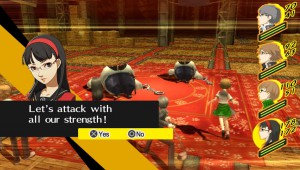 The Persona games are often referred to as being half high school drama/friendship, half jrpg, and that description, if a bit simplified, is probably very apt. This if course means that if you really hate high school anime, you may have a hard time with Persona 4 (and Persona 3, which is very similar in structure). If you like the rest of the concepts, but would prefer a less character-driven approach, there are several other games in the Shin Megami Tensei series that would definitely be worth a look – the Digital Devil Saga duo in particular has a fantastic story and characters, but has absolutely zero high school and no social aspects. You may also like the side games (Persona Q for the Nintendo 3DS, for instance), or even the older Persona games, which are more like old school dungeon crawlers. While the older entries still have their merits, I feel like the Persona series definitely took a step in the right direction when it was revamped with Persona 3. But we’ll take a look at the predecessors at a different time.

For now, go get Persona 4 and play it. You won’t be disappointed.

Trying out Lost Kingdoms Or, "Dark Souls challenging me to a children's car...
Trying out Shin Megami Tensei: Persona Over the years, the Persona games have really grow...

Be the first to comment on "Playing through Persona 4 Golden"