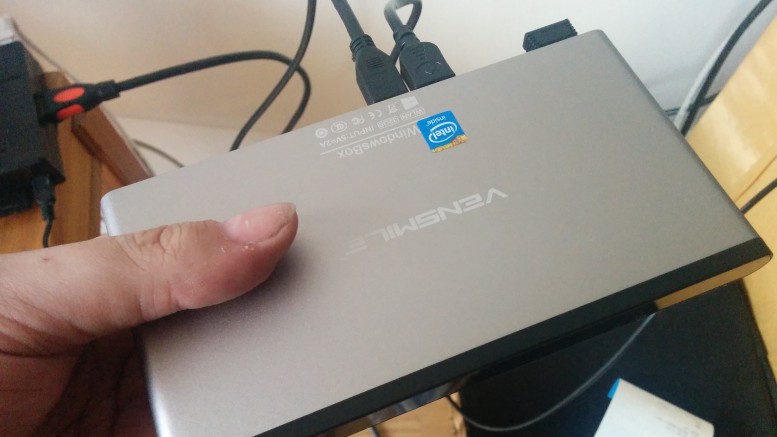 The computer itself is very small

Or, “Chinese knock-offs are apparently both cheap and useful.”

Most of you probably know about the Raspberry pi. If you don’t, well, it’s a computer-on-a-chip that runs Linux and uses an SD card for both its storage and operating system. It’s basically intended for education, but enterprising developers have turned it into many things, such as a web server, a build server, or a multimedia HTPC/Emulation station. Why, yes, you can buy a pretty capable emulation machine for only like 30 bucks, plus an SD card and a controller, of course. The pi can run stuff up to about…the Mega Drive or SNES without huge issues. But it’s not perfect.

I wasn’t really happy with the performance, honestly, although obviously I got what I paid for. In that respect it is fine. I wanted something that could do more, but I wasn’t ready to pay hundreds of dollars for it. So, I bit the bullet and bought a mini-pc from AliExpress; the Vensmile quad-core mini-pc to be exact. It cost 97 dollars with free shipping, and actually got here in a mere 3 weeks all the way from China.

Now, what I liked about the specs were that a) it had a powerful Intel Quad-Core processor and b) it ran Windows 8.1 natively. Say what you will about Windows 8.1, but it is user friendly if nothing else. And this also meant that I could run anything a “normal” Windows pc could run, as opposed to the Raspberry pi requiring special Linux builds (that can’t run everything the derived from distribution can anyway, as I learned when trying to install mongodb on my pi). Besides, the Vensmile has built-in WiFi and Bluetooth. The internal memory is only 32GB, and Windows takes up about 9 of those, so you may want to connect a USB hard drive or similar (or share one via the network, either from a different device or from the router itself).

There are similar products available for around 2-3 times the price, as far as I’ve found. In fact, I found one available locally for 2,5 times the price that had the exact same guts but fewer ports, and in stick-form (in other words, you plug it directly into your HDMI-input, instead of using a wire). While sticks are cute, they are pretty small and flimsy, and I prefer to have a little weight to the device, since I want to be able to connect controllers and other devices to it. 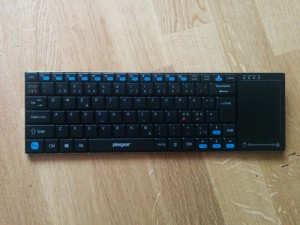 If you’d rather use a keyboard, I can recommend a wireless combination keyboard (mouse+keyboard)

Speaking of controllers, I hooked an Xbox 360 controller to it and installed XBFirst, Steam and a combination of RetroArch/Libretro and EmulationStation. XBFirst allows you to control the Windows 8.1 Start Screen purely with a controller, and the other programs are for games and emulators.

Everything so far runs incredibly well, although to be fair the most taxing thing I’ve made it process is Neo Geo arcade games (Last Blade 2 is amazing) and Playstation One games.

The package as a whole is cheap but powerful, and very easy to use and maintain. An excellent way to spend a hundred dollars. If you want an HTPC/EmulationStation, you can’t go wrong with this.